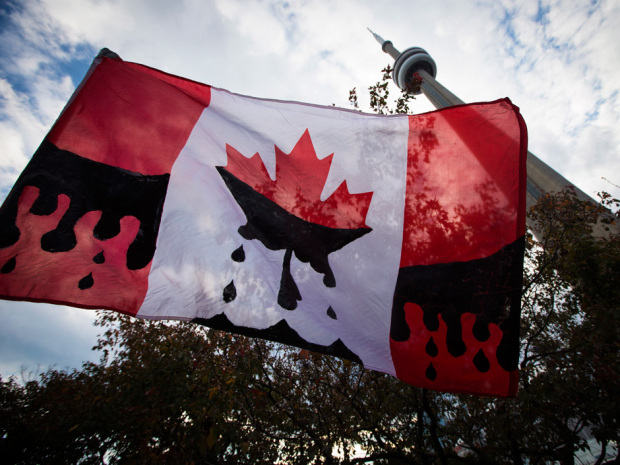 At COP20, Canada Is Representing the Fossil Fuel Industry

This piece is cross-posted from Truth-Out.

At the COP20 United Nations climate change negotiations in Lima, Peru this week, it’s clear that the Canadian government is representing Canadians when making decisions – if by Canadians, one means fossil fuel companies, that is.

Anyone who’s never visited the country might assume that Canada is only comprised of Shell, Chevron, TransCanada and their siblings, since the Canadian government seems to be paying attention to no one else here in Lima. It seems there is no room for concerned or affected citizens in Canadian negotiators’ packed agendas – although fossil fuel representatives’ requests are seemingly always accommodated. It goes without saying that this industry wields significant power to interfere with the UN process.

Examples of this disproportionate influence are crystal clear to young Canadians at this conference. Canada has been getting cozy with Chevron and TransCanada at stakeholder briefing sessions that are designed to inform Non-Governmental Organizations including youth, women and indigenous groups of any progress during the talks. Instead of being included in the conversation, frontline communities are once again pushed to the sidelines.

It doesn’t get any better on the provincial front. Canadian environment ministers such as British Columbia’s Mary Polak have been bragging about their scheduled meetings with Chevron’s Climate Change ambassador. Has Minister Polak met with any frontline communities yet in her time in Lima? If she has, she certainly hasn’t tweeted about it with such enthusiasm. In fact, Minister Polak followed her Chevron meeting with a side event at the negotiations, at which she touted the advantages of liquefied natural gas as a method to “displace” Chinese coal emissions. It is clear that, to the dismay of Canadians and the values they stand for, the Canadian government is allowing fossil fuel companies to usurp the UN process.

Seeing such a heavy influence of fossil fuel companies at these negotiations is disconcerting. Canadians pride themselves on their country being progressive, just and kind, but the current actions of the Canadian government are anything but. Canadians have the right to demand better representation at these negotiations, and deserve to have people representing them who aren’t consistently being called out as bullies.

Canadians also deserve to know more about what is going on within these halls. The official statements on the part of Canada have been mum, and for good reason: Canada has nothing to say that would make citizens back home proud. That, however, certainly does not mean that they should not solicit input from stakeholders.

The influence of fossil fuels transcends this conference. In fact, just last Tuesday, when Prime Minister Stephen Harper was asked about the possibility of regulations for fossil fuel companies in Canada, he dismissed the suggestion as “crazy, crazy.” While tar sands are expected to account for a 38 percent increase in Canada’s greenhouse gas emissions by 2030, it seems as though the Prime Minister isn’t too concerned about the oil and gas industry. Why is this, when Canadian negotiators in Lima keep repeating that Canada will do everything in its power to meet its emissions goals, which are impossible to attain if business continues as usual?

Canadians from all walks of life – from indigenous elders, to young generations, to women, to Albertans, to Quebecers – should be included in more accessible, productive conversations with the Canadian government. While one may argue that fossil fuel companies are shareholders in their own right, it is widely understood that their presence will undermine this process completely. If tobacco companies are no longer allowed at World Health Organization meetings, why are fossil fuels allowed into a conference about climate change action?

Canadians should not stand for the carte blanche granted to these companies. Canadians must contact their elected representatives – at all levels of government – to let them know that climate change action is deeply rooted in Canadian values. If Canadians don’t stand for equality, transparency and fairness when it comes to climate change, than for what will we stand?