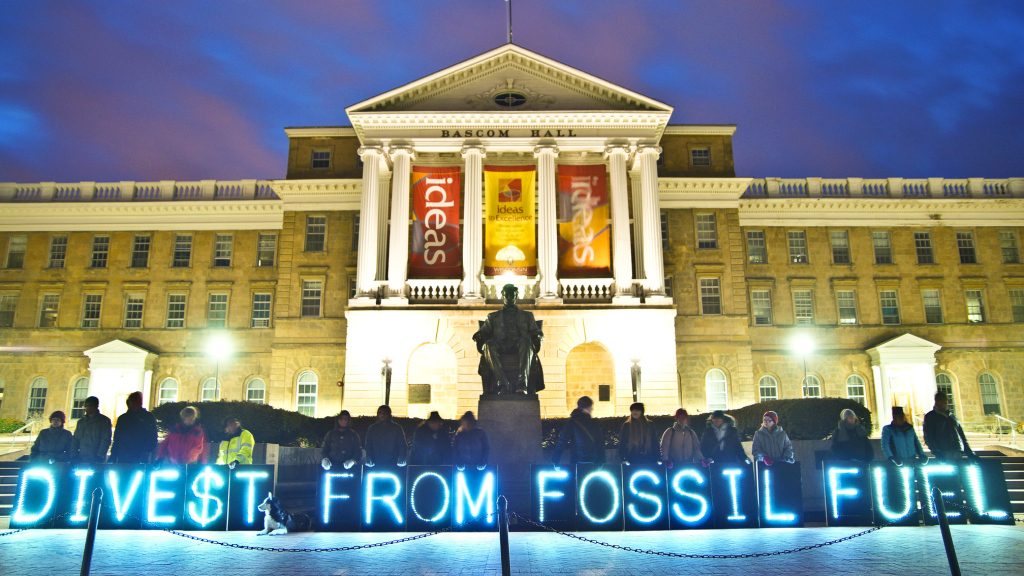 This piece was written by COP20 delegates Geoffrey Supran and Ploy Achakulwisut for Grist.

LIMA, Peru — Though fossil fuel companies may wave their hands dismissively at the divestment movement, some nervous actions of late show more concern than they let on. Consider this curious incident here in Lima, as the United Nations climate talks entered their second week. Shell’s chief climate change advisor was slated to present a panel, cosponsored by Chevron, entitled, “Why Divest from Fossil Fuels When a Future with Low-Emission Fossil Energy Use Is Already a Reality?” Except … they didn’t. Late last week, the title was quietly changed to the more innocuous, “How Can We Reconcile Climate Targets with Energy Demand Growth?”

It must have been done in a hurry because they forgot to change the web address for the event page.

The title change did nothing to placate the frontline community members and youth climate activists who flooded the event. Panelists found themselves blocked out for half an hour from the private pavilion of the International Emissions Trading Association, which is sponsored by the likes of Shell and Chevron.

Shell’s sponsorship of the divestment event-that-wasn’t earned the company a specially created Sly Sludge Award, presented by the Climate Action Network, an affiliation of hundreds of environmental NGOs.

As Shell’s misstep reveals, divestment has got the industry’s attention, and understandably so. The global movement calling on universities, religious institutions, cities, and states to stop investing in the fossil fuel industry is growing faster than any other in history, now spanning 697 campaigns worldwide. Stanford University, the Rockefeller Brothers Fund, 34 cities, and the World Council of Churches — representing over half a billion members — are among the 700 investors worth more than $50 billion who have already committed to going fossil-free. Norway is also considering divesting the country’s $840 billion sovereign wealth fund. Even the current negotiating text of the U.N. climate agreement includes a call for divestment.

The power of divestment stems not only from the act itself, but from the movement it catalyses: galvanizing a sense of generational mission in young people unyielding in their demand for an end to business-as-usual leadership. When electric utility giant NRG announced its goal of 90 percent emissions reductions by 2050 last month, the company’s chief executive, David Crane, said of divestment, “I don’t relish the idea that year after year we’re going to be graduating a couple million kids from college … with a distaste or disdain for companies like mine.”

Shell’s fumble is just the latest defense against divestment. Australian National University’s divestment announcement was met by the threat of legal action, while Sydney University’s announcement to review its investment policies led NSW Minerals Council head Stephen Galilee to go so far as to suggest that the divestment campaign might be illegal. Even ExxonMobil weighed in twice this fall, its vice president of public and government affairs, Ken Cohen, blogging that the divestment movement is “simply … out of step with reality” and “a divisive and counterproductive diversion from the search for genuine solutions.” Divestment packs a punch even at the highest levels, as is made by clear by Australian Prime Minister and coal champion Tony Abbott’s denunciation of ANU’s decision as “stupid”.

As the old adage goes, if you’re taking flak, you’re over the target.

It’s not only the divestment campaign that is tightening the screws. Government subsidies for the fossil fuel industry are also under scrutiny in Lima. Last Saturday, a new report by nonprofit Oil Change International revealed that the widely celebrated $10 billion in climate aid pledged by the world’s richest nations is a mere third of that spent subsidising fossil fuel extraction each year. “Phasing down of high carbon investments and fossil fuel subsidies” is among the measures currently under consideration by negotiators in Lima for a legally binding climate agreement in Paris next year. Last week, the Bank of England announced that it is investigating whether fossil fuel companies pose a systemic risk to financial stability.

There’s also the small matter of science. For a reasonable chance of avoiding the“severe, pervasive, and irreversible impacts” of climate change, two-thirds of proven fossil fuel reserves must never be burned. Indeed, with the U.N.’s current negotiating text going as far as to propose “full decarbonization by 2050,” ExxonMobil and Shell may cease to exist in their current forms in 35 years. Former BP boss Lord John Browne has warned that climate change poses an “existential threat” to the industry.

Under pressure from all sides, the fossil fuel lobby’s self-described “win ugly or lose pretty” tactics — based on the playbook perfected by Big Tobacco and othermerchants of doubt — are in full swing. The industry confidently misinforms our public and politicians about silver bullet “false solutions” like natural gas andcarbon capture and storage, in an effort to distract us from the reality that political and societal will — and not technology — are now the bottleneck to meaningful climate action. Thirty fossil fuel companies and trade associations, including BP America, Chevron, Duke Energy, ExxonMobil, Koch Industries, Peabody Energy, and Shell, continue to fund the anti-science disinformation factory that is the American Legislative Exchange Council. Hundreds of millions of dollars spent every year lobbying and donating in Washington against legislation for climate action further strangle the bottleneck.

Divestment loosens the fossil fuel industry’s grip, which is exactly why they are so afraid of it. Divestment seeks not to financially bankrupt these companies, but to morally bankrupt their business-as-usual practices and undermine the false legitimacy implied by their associations with universities, the U.N., and other respected bodies. Divestment shifts political reality to create breathing room for meaningful leadership and legislation. In the words of Climate Action Network Director Wael Hmaidan, “If politics is the art of the possible, campaigning is about changing what is possible.”

Join us on Feb. 13, when divestment advocates around the world will celebrate the first ever Global Divestment Day.