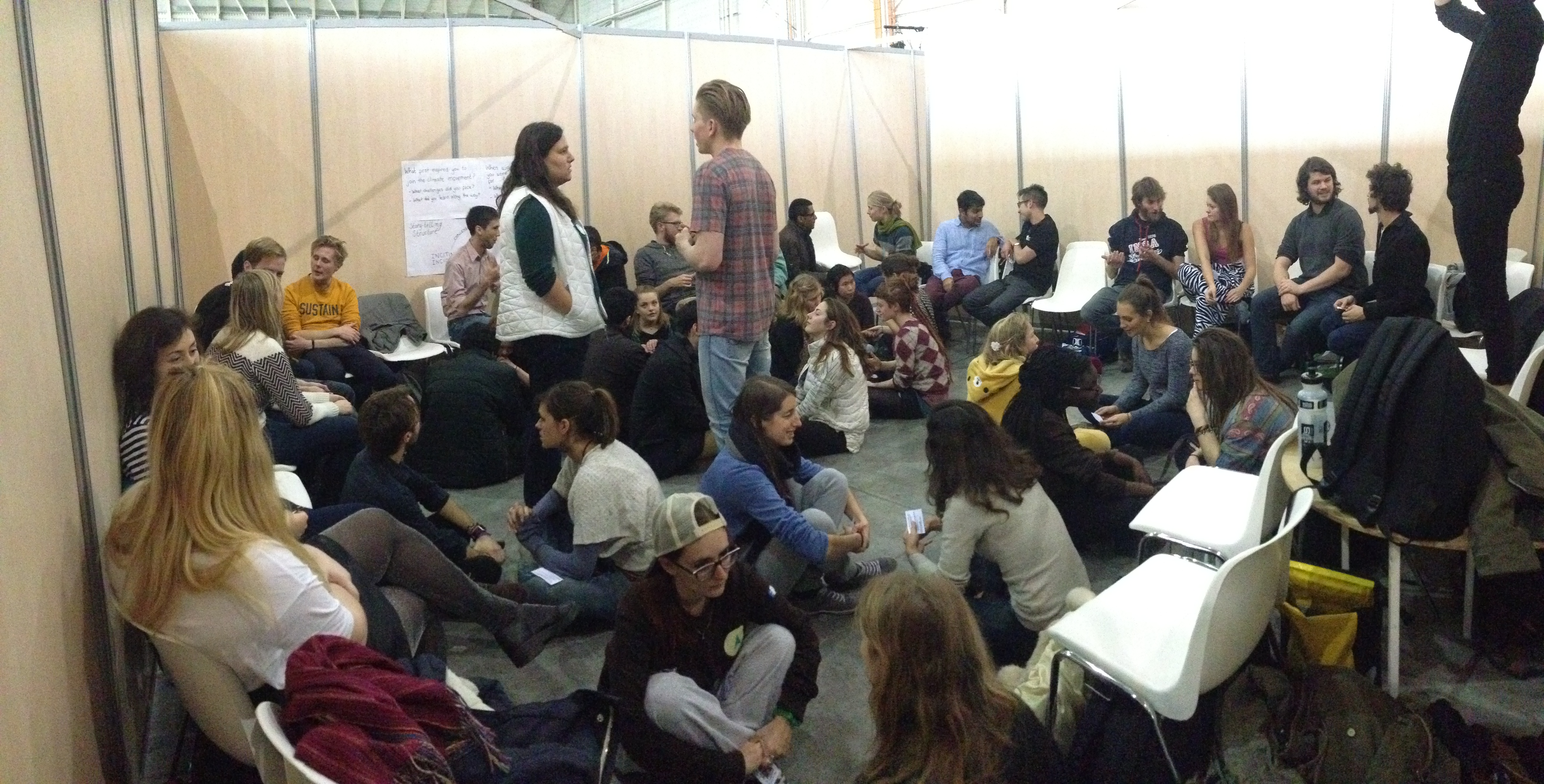 Five months in the works and cold rain got the best of me. Morgan and I planned to end our bicycle-powered Climate Journey between the U.S. and Paris on one big, final, 100km day. Unfortunately, I have my mother’s poor circulation and so when the rain whipped across us in sheets last Tuesday, my hands became like angry anthills and then, nothing. That was the tipping point. Numb hands and 50km more in constant wind and rain didn’t seem possible or healthy for me. So we cut our big, final, 100km day in two. Sometimes, nature reminds you that she still can win.

Two days later, we waded in lines of French, English, and many other languages to get our passes to the eleventh Conference of Youth, COY11. An hour later, Morgan and I sat on a concrete floor, surrounded by a circle of white chairs, scribbling diagrams with a black Sharpie. Salle 8. Inspiration zone. The loudspeaker in the metal conference center droned on above us, like some divine, bilingual COY god.

Finally. It was here. Five months of thinking about why I joined the climate justice movement. Why I am still committed. Five months of dreaming, thinking, and planning to put these thoughts to use during a workshop at COY, where we could engage with youth from around the world and share powerful stories. Finally. The cumulation of five months of thoughts. Compressed into two hours.

The room filled. A few familiar faces turned to warm hugs. We always said we would see each other again in Paris. And here we are.

And there I was. Ready with two poems. The fulfillment of hopes made months ago to Morgan. “I want to tell my story in spoken word,” I told her. Then the moment came to tell my story. Why do I care about climate change and why did I commit to biking to Paris over five months.

It is one of many paradoxes I have come to recognize in performance. “If you remember it, something went wrong,” my band director Mr. Fortlander would always tell us. If we finished a performance, no recollection meant a great performance. An odd idea, seeking amnesia.

I wish I could describe to you what happened during the poems. However, I only remember moments –  flashing reflections as if walking by a long building with randomly spaced and slender windows. 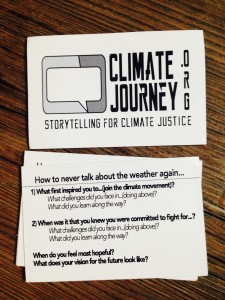 We then shared the two questions that have been most powerful in discovering our own stories and those of others. Why do you care about…? When did you know you were committed to…? (insert photo) Now, it was their turn. We broke up into pairs and began delving more deeply into our stories. Facts, statistics, policy left purposefully at the door. Here, we sought connection. To create a space in which we could realize the types of intentional listening and sharing necessary to build a new culture, one capable of tackling the intersectional crises facing the planet and its people. Culture, in simple terms, can be thought of as merely a collection of conversations. Currently, our conversations are complicit with a warming planet.

Two days later, our friend Ellie stood on the train platform, talking with a new acquaintance as she waited for a train back to the center of Paris. “Oh wait,” the man said. “We cannot talk about the weather.” Pulling a card out of his wallet. “Luckily, I know what we can talk about instead. I got this card from a storytelling workshop the other day.”