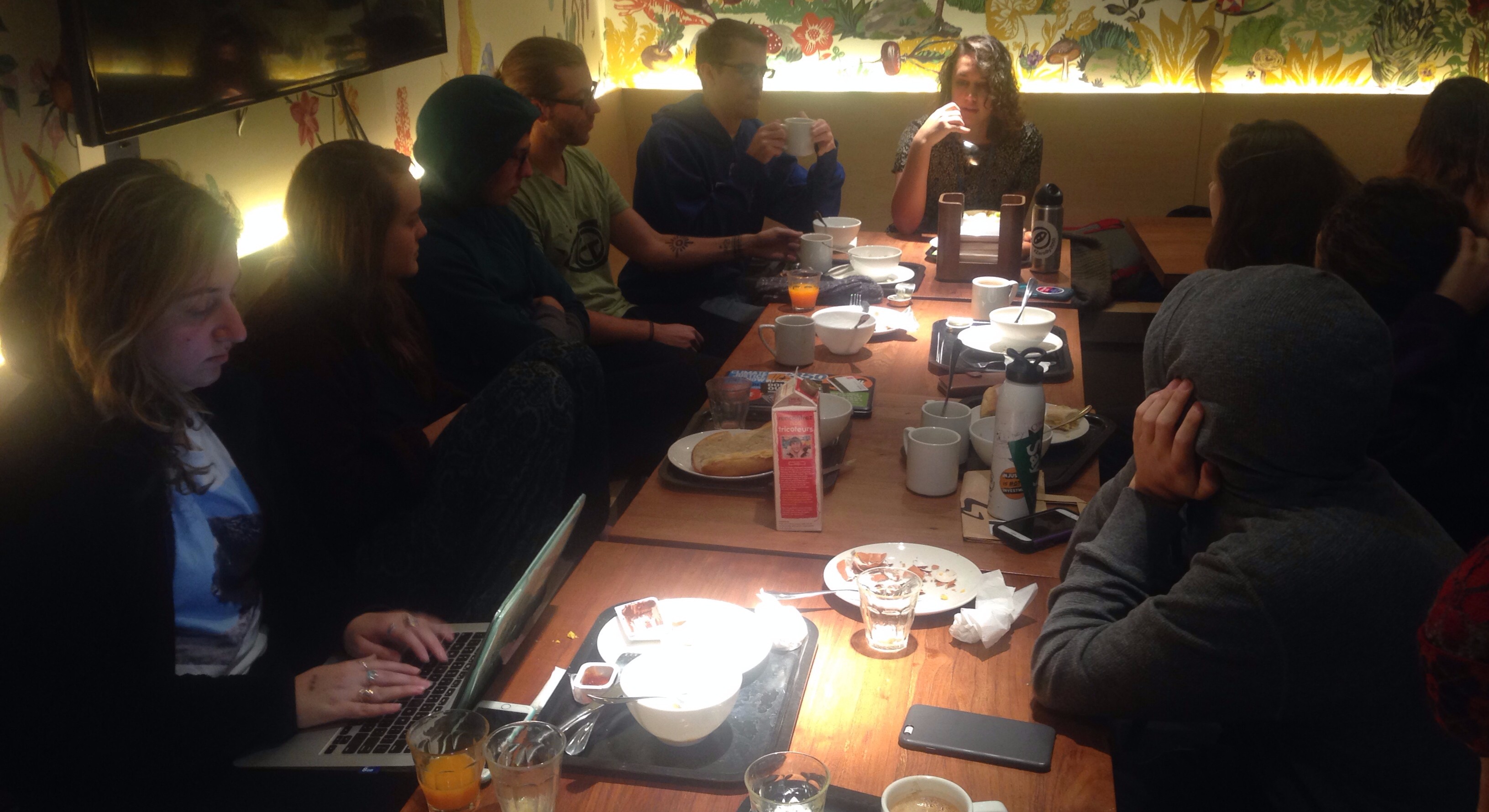 This post originally appeared on the CSSC blog, and is part of an on-going, inter-organizational series of reflections by activist Ryan Camero. You can find the first post here, on Restore the Delta’s blog.

I came to Paris representing the California Student Sustainability Coalition in this rare and crucial point in time, to decide a global agreement on collective action against the climate crisis. Because unexpected circumstances where many groups, including ours, did not receive their requests for badges (they are expectedly difficult to obtain), I was very grateful to be taken into the arms of SustainUS, a United States-based organization that enable youth climate leaders across the country to attend the actual negotiating talks. With my heart trying to hold everyone back home in my head, I dove into the unfamiliar.

As a newcomer being welcomed into a space that had delegates preparing months beforehand, I felt as if I was entering a new world of community organizing on the international scale.

I hold a deep love for this year’s dreamy heartbreaker delegation of 21 (22 including me as the black sheep delegate!), not all pictured here: 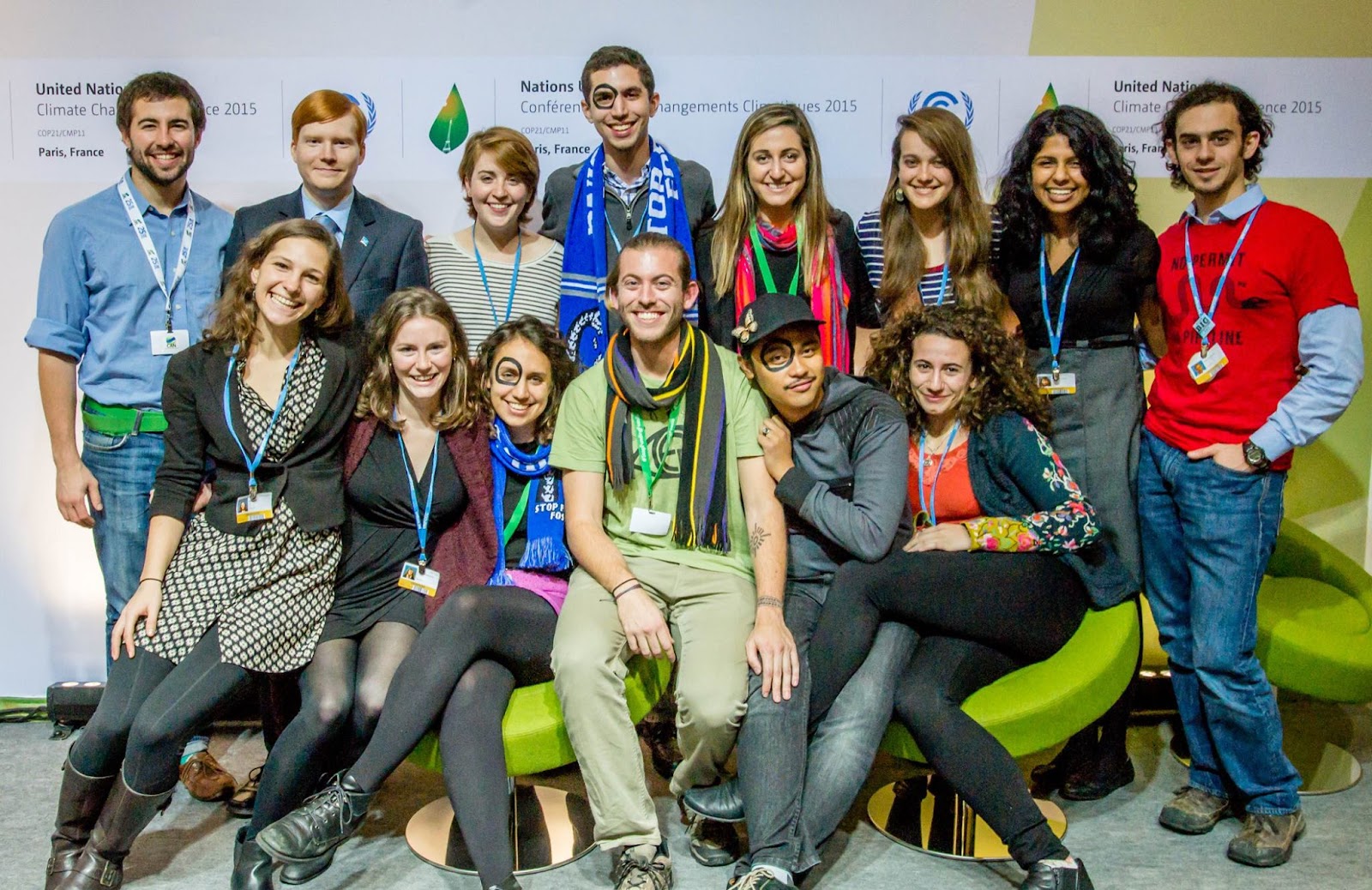 A typical meeting for our delegation involved us huddled up together in the corner of our hostel, taking turns offering our viewpoints and planning our individual and collective actions for the day. As time passed, I began to see the immense and shared passion that centered us as a team – and the very diverse skillsets and experiences inspired in me an understanding that I was in the presence of a supergroup of resilient youth representing the U.S. I was astounded at the team’s ability to produce a maelstrom of news pieces across major media, spanning BuzzFeed, Thought Catalog, the Takeaway on NPR, the Huffington Post, and others. 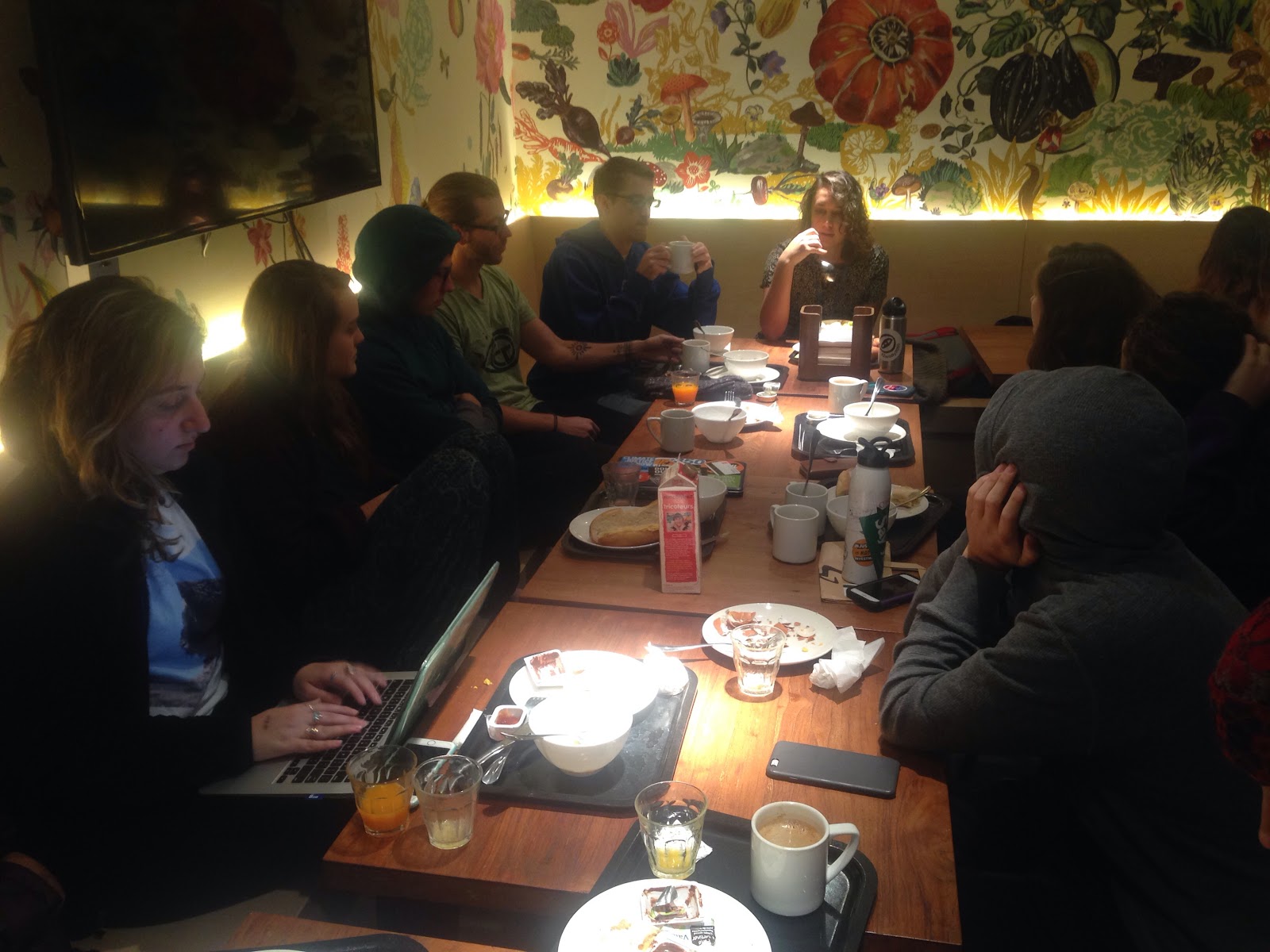 There were the fearless and adventurous Morgan Curtis and Garrett Blad, a duo who went on a five-month bicycling/listening tour called Climate Journey in pursuit of understanding this crisis from personal stories, having traveled through three states, two provinces, and nine countries to get to Paris.

The focused, kind and reserved Jeremy Pivor working diligently on influencing language in the agreement, his unwavering resolve setting our reasons for being here deep into perspective: “I have a brain tumor, and I’m more scared of climate change than I am of that.”

The critical and clarity-inducing Chloe Maxmin whose thoughts on youth power and powerlessness revived my spirit in such a withering time.

And the examples grow endless.

Mountaintop removal in Virginia. Fracking rigs in Vermont. Tar sands pipelines in the Midwest. Students from Yale, Harvard, Princeton, Dartmouth, Oxford. Migration research for the Internal Displacement Monitoring Centre. Canada’s Top Environmentalist Under 25, galvanized through firsthand experiences in the Arctic. Every story I learned about I held tightly, as my barriers of insecurity gave way to bridges of solidarity. Every beautiful human being in our delegation was fighting from every angle, and fighting hard.

I kept grappling to understand the reality of our conversations. Every single person who was here in Paris, inside the negotiations or outside, were carrying narratives that we never thought would play out. These were such difficult conversations. And it still continues to be a never ending process of learning. Every sentence, story and article contributes to a vast and endless consciousness rising out of society; all waiting, worrying, wandering, wishing for a better future than the path we are currently on.

These thoughts propel energy for the changes we need to see- the ones that reach not just some of us, but all of us. And it’s with these moments that I am feeling, more than ever, that our shared awareness is unearthing a undeniable movement of movements. 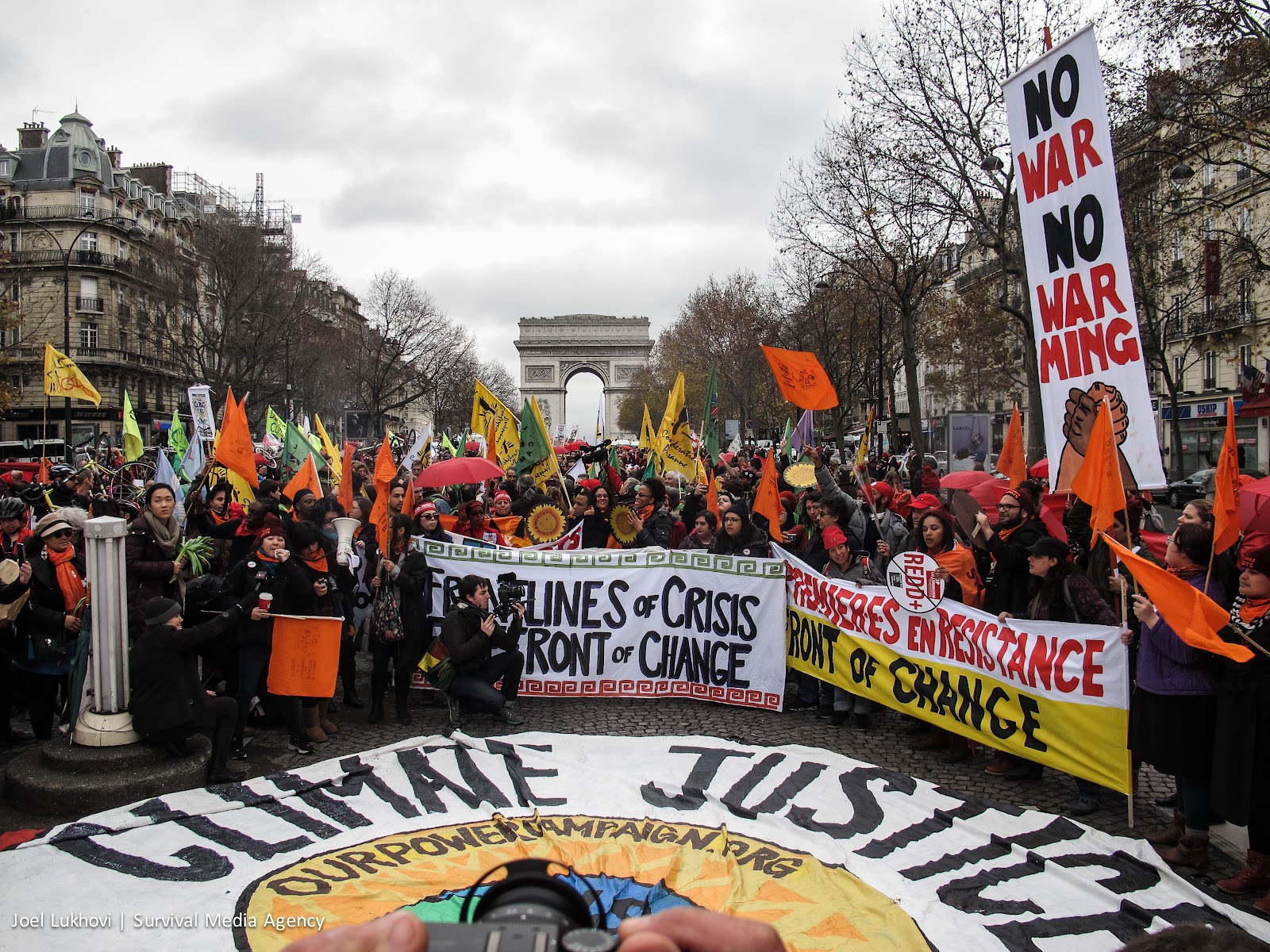 In the streets at the D12 (December 12th) protest, where thousands gathered. Photo by Joel Lukhovi.

Movement is a beautiful, multi-faceted concept. There is an absolutely inspiring and incredible video called Orgesticulanismus, by Belgian animator Mathieu Labaye that I deeply encourage anyone to watch. Labaye made this nine-minute animation in tribute to his father Benoit, who suffered from a multiple sclerosis that turned him paraplegic. His work celebrates his father’s intimate understanding of the human importance of movement, physically and metaphorically. I find so much beauty in these words, an interview with Benoit, spoken in the video:

“I think it’s by the movement you appropriate your own life. By the freedom to come and go, to have gestures of love, tenderness, anger, whatever. When you are deprived of movements, as I am and as a lot of other people are, I think if you want to survive, you must reinvent the movement differently. And so what happens inside my head isn’t purely brain, purely intellectual. It’s a way of recreating an inner space which is also my freedom.

When you live a severe handicap, when you live absolutely still, dependent, you live, in fact, something that can’t be shared, that can’t be easily expressed, which you can’t easily talk about. Because when two people talk, to be able to understand each other, they need to have a minimum of common experience between them, to speak of something they both know from some form of experience.” 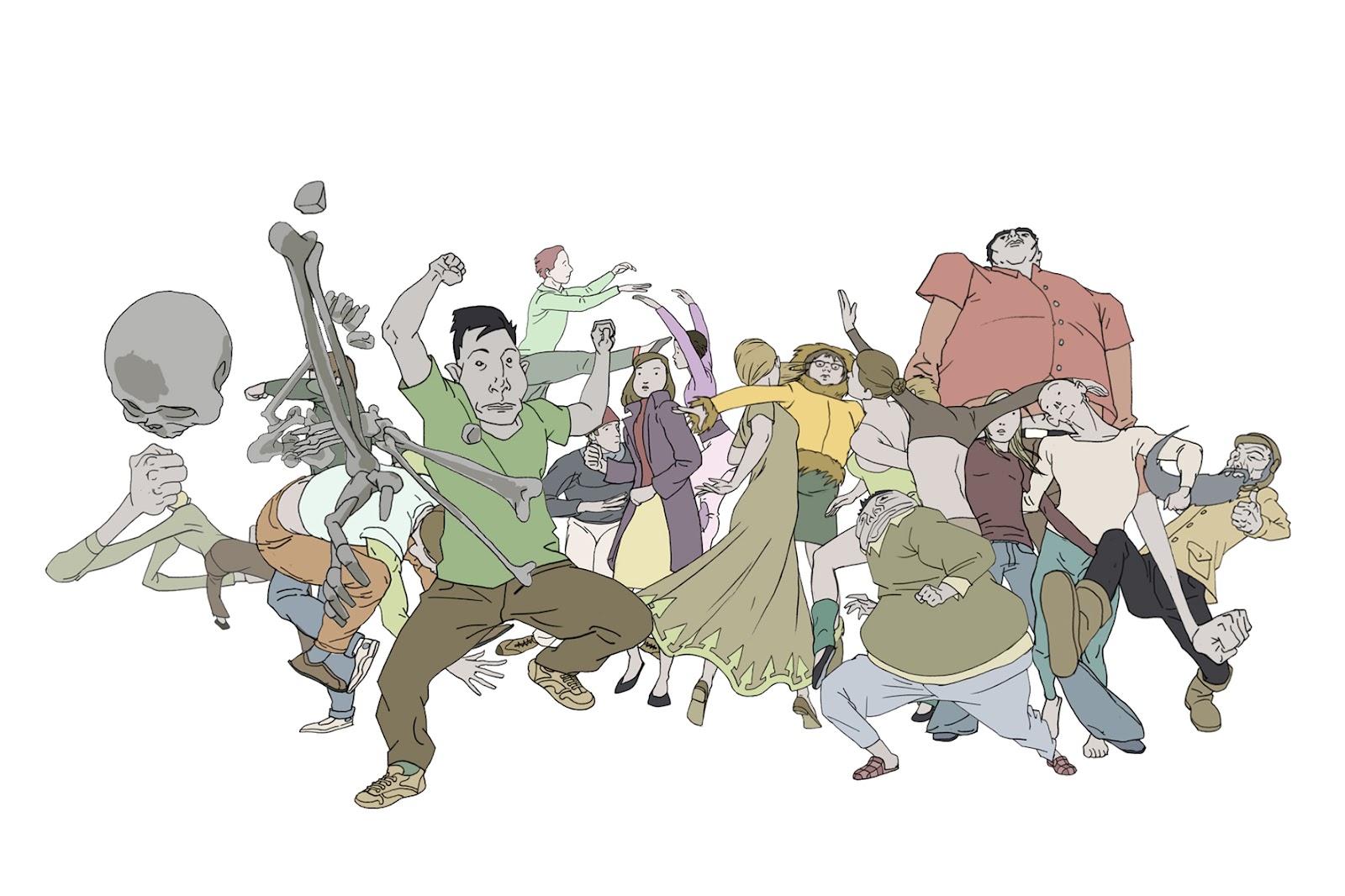 The many movements of Orgesticulanismus, the animation by Belgian artist Mathieu Labaye.

“Sure, the stillness, the handicap, brings you to the conclusion and to the gradual acceptance that there’s a certain number of things that you can’t do. But conversely I think it opens a whole bunch of new possibilities, notably with inner freedom, inner space, but also with the way you can come in contact, in relation with others.

I think there is in the handicap, in the disease, a lot of potentiality. Human beings have endless supplies of desire, of energy, of inner strength. And it’s something you discover with maybe more urge, more intensity, when you’re deprived of movement.”

There is momentum in the things that immobilize us. Our scars are symbols of our survival.

Ryan Camero is an arts activist and community organizer who believes wholeheartedly in the transformative powers of visual storytelling, cross-cultural understanding, and inter-generational communication in achieving social justice. As a coalition-builder across many groups, Ryan works primarily with Restore the Delta, the statewide California Student Sustainability Coalition, and the internationally known Beehive Design Collective. He attended COP21 and is attending COP22 by way of the SustainUS youth delegation. The crux of his work is embedded in several points of focus; anti-water privatization, inter-sectional organizing, and anti-oppression. He currently is based out of Stockton doing work on the statewide and national level. Camero additionally is one of six youth environmental activists across the country to be awarded the national Brower Youth Award in 2015.