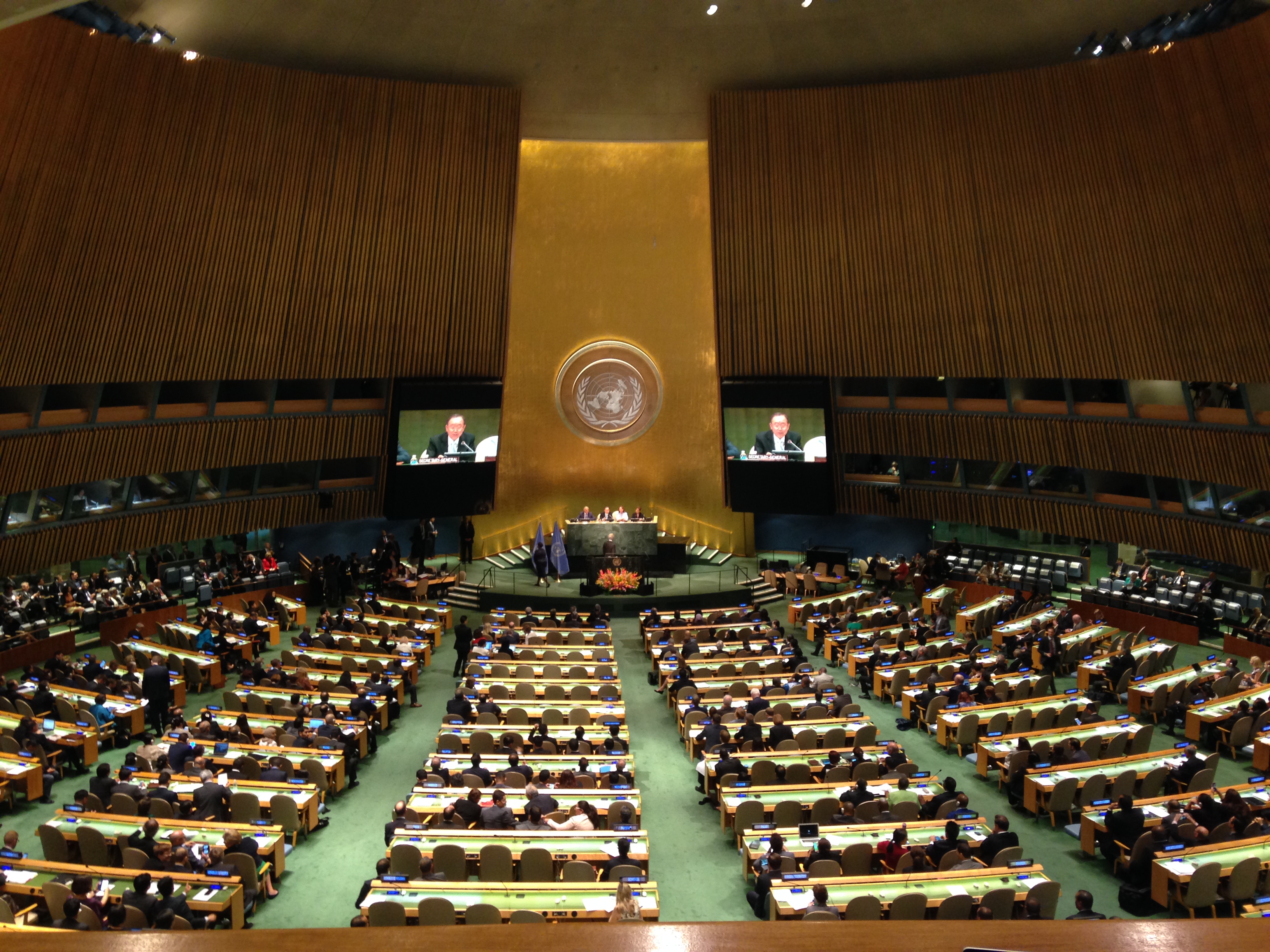 Paris Agreement to Enter into Force

My stomach tightened as I weaved through uncountable hordes of blue-suited officers. This was midtown Manhattan on Wednesday, September 21st. Businessmen beelined past me nursing coffee on their way to the office, shined shoes scuffing on gum-studded pavement. As a white man growing up in New York City, I’ve personally been spared the daily horrors of racialized aggression embedded in this city’s policing system. Despite this shield of codified racial injustice, I and anyone living in the heart of the largest, most militarized municipal police force in the world cannot have failed to notice implications of the city’s legacy “stop and frisk” policing (now experiencing judicial scrutiny and reform). What differs is whether and how we recognize and respond to a system that breeds and feeds on racialized fear, evidently without reducing violent crime.

Today, as I worked my way east on 42nd street to bear witness to the United Nations General Assembly special session on climate change, the sea of armed men (and a few women) felt especially grim. In the past week, police officers murdered two Black men: Terence Crutcher, in Tulsa, and Keith Scott, in Charlotte — police who were, as in all too many cases, apparently in no immediate danger. Protests continued unabated.

Over the weekend, police officers arrested a New Jersey man for building and detonating bombs in Manhattan’s upscale Chelsea district. The suspect, a Muslim, was born in Afghanistan. The bombing and arrest cast a new wave of visibility on Islamophobic and anti-immigrant sentiments that were already at a fever pitch, thanks in part to the incendiary example of the New York-based Republican presidential candidate.

And now, as leaders gathered from every corner of the globe to celebrate the latest round of official state commitments to last year’s Paris Agreement on climate change, the city seemed jolted to new heights in demonstrating preemptive defense. With the first sunrays pinkening the city, I followed instructions to arrive over two hours early a few blocks from the UN Headquarters. A UN intern personally escorted me and others through several rounds of identity checks and metal detection as we moved toward the Headquarters building. Grouped in small batches, we clutched paper badges identifying ourselves as “civil society” observers or “journalists.”

I’d come to the UN to represent our delegation of 13 US youth as we prepare for our work in Marrakech, Morocco at the 22nd “Conference of the Parties” of the UN Framework Convention on Climate Change. We are determined to cut through pomp and circumstance, to go beyond flashing badges and security checkpoints, and to demand action on the core issue at stake: survival and justice for youth, people of color, Indigenous people, women, workers, immigrants, and others on the frontlines of climate change.

The core issue at stake: survival and justice for youth, people of color, Indigenous people, women, workers, immigrants, and others on the frontlines of climate change.

Today’s heavy police presence made the links between climate change, militarism, economic exploitation, and gendered and racialized oppression inescapable. What is the cause and purported solution for a “dig-burn-dump” energy economy that exploits, pollutes, and wastes, benefiting the privileged while burdening the marginalized? What is the cause and purported solution to systemic racism, to xenophobia and religious persecution, to militarized extremism in the US and abroad, to gender-based violence and sexual oppression?

Take up armor, arms, and uniforms. Protect “us,” now, and beat “them” into submission. Deal with the consequences later, as they (inevitably) rise up.

Looking down on curving symmetrical lines of Delegate seats and far removed from the podium, I felt the imposing expanse of the General Assembly pressing up from below. After an upbeat introductory video projected from two corners of the room, UN General Secretary Ban Ki-Moon noted that formally activating the Paris Agreement required passing two thresholds: 55 countries must “ratify” as a Party to the accord, and these countries must collectively account for more than 55% of global carbon dioxide emissions.

Ban struck a prideful tone, announcing that we would breach the 55-country threshold today. 29 Delegates had already committed their countries to the Agreement, 31 others were joining ranks today, and several more were working hard for swift ratification. One-by-one, Ban invited representatives from all 60 ratifying countries — the smaller countries often represented by heads of state themselves — to shake his hand and pose for a picture.

US Secretary of State John Kerry marked significant progress while noting gravely that “with each passing day, the problem is growing worse.” Fiji Prime Minister Voreqe Bainimarama recognized his country as the first to formally ratify the agreement, driven by life-or-death urgency should his island nation wish to survive rising tides already threatening its shallow shores.

With the US and China already on board and the EU seeking a route to prod its 28 members to ratify immediately, Kerry and Ban projected confidence that the second threshold — accounting for over 55% of global carbon emissions — would be crossed this year as well.

Their confidence has since been validated. The Agreement is slated to formally activate on November 4th — three days before our delegation begins work in Marrakech, Morocco at COP22. The last climate deal took several years to ratify, losing participation of the US, the globe’s worst climate offender, along the way. It’s no surprise that commentators are widely cheering ratification of the Paris Agreement in less than a year as a remarkable achievement —  virtually unprecedented for a major international accord.

Yet let’s make no mistake: for all the armed policing in and around the UN General Assembly and undoubtedly under preparation for the Marrakech conference, the Paris Agreement itself sets only aspirational goals for limiting warming to 1.5 or at most 2 degrees Celsius. The Agreement codifies a set of diplomatic tools that prod countries to independently reduce emissions. But the agreement offers no rules for how and for whom countries participate.

The security state — whether billed as national security, social security, or environmental security — packs many punches for the masses. It packs far fewer for power holders who would choose personal protection over collective liberation. Will our leaders act in line with those of us in the US who are most, or least, responsible for climate change? Will they act in line with those of us who stand with least, or most, to lose from several degrees of warming?

For all the qualified jubilation, fast-tracked efforts to push the Paris Agreement through cannot be mistaken for “ambition.” Our delegation, joining youth from the US and across the world, recognizes that a fast-tracked climate accord demands acting up, not down. The prospect of an activated Paris Agreement bolsters leverage by those most impacted by climate change, including young people, to push the US and other major polluters to make transformative policy shifts in line with justice and survival.

Our delegation, joining youth from the US and across the world, recognizes that a fast-tracked climate accord demands acting up, not down.

Immediate and necessary first-steps abound, determined not in elite spaces but rather through bottom-up efforts that already surround us. Just and effective solutions must take leadership from those with least responsibility for and most at risk from fossil fuel extraction, carbon co-pollution, and climate change itself.

The Obama Administration must immediately join with those most impacted, especially Native people, people of color, and workers, to keep fossil fuels in the ground while defending cultural and physical survival — beginning by nixing development of the Dakota Access Pipeline. This and the next president must quit pandering to entrenched fossil fuel efforts and halt all new fossil fuel leasing on federal lands and oceans.

The next president must quit pandering to entrenched fossil fuel efforts and halt all new fossil fuel leasing on federal lands and oceans.

The US must launch an all-in effort to advance an equity-based Just Transition to 100% clean, renewable energy by 2050, building on innovative regional campaigns like New York Renews, even while supporting communities to pull carbon into the soil through regenerative agriculture.

Obama’s Administration must make way for 21 youth plaintiffs to proceed with their landmark suit challenging the federal government for failing constitutional obligations to act on climate change.

As our country elects its next leader in November, I will travel to Marrakech with 12 other US youth to push for climate justice. Our delegation will carry with us local urgencies while working in solidarity with those most impacted here and in the Global South. Fast-tracking activation of the Paris Agreement justifies complacency from neither us nor our heads of state. Rather, an active Agreement must only intensify our push from the grassroots. Together resisting downward spirals into shows of military might, we must act up for survival, justice, and collective liberation.