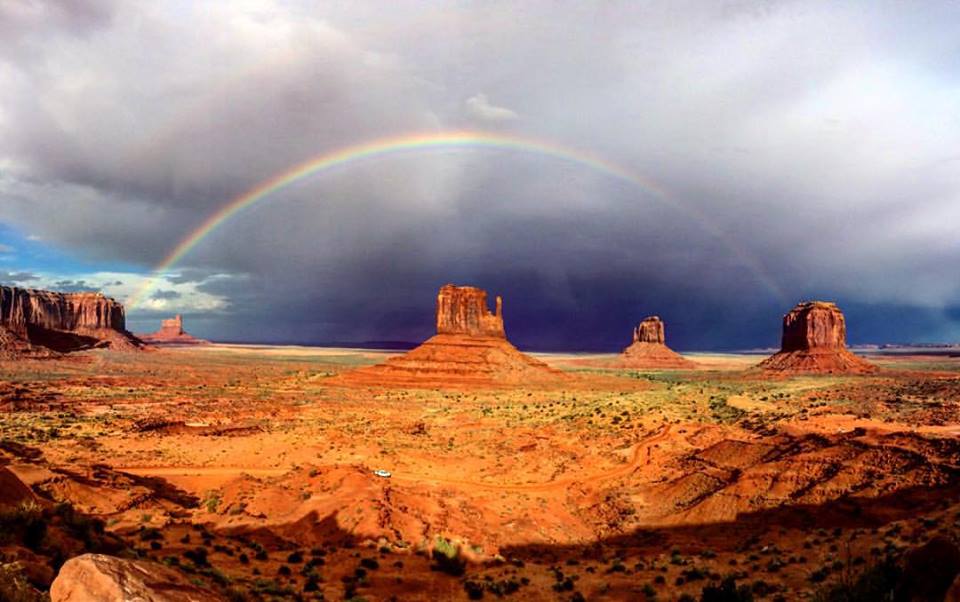 The First Nations Development Institute, based in Longmont Colorado, awarded the Diné Policy Institute (DPI) $20,190 grant to study the possibilities of sustainable land reform for the Navajo Nation. The research team includes COP22 Delegate Kayla DeVault. The land reform study analyzes the history of Navajo land laws, current boundaries and problems, and traditional cultural knowledge through literature reviews, interviewing federal agencies, and even surveying Navajo people on their perspectives of ideal land use.  The findings and subsequent recommendations will then be shared with the Navajo Nation Council.

Land on the Navajo Nation – like any tribal land – is held in a trust relationship with the US federal government.  The Navajo Nation is “checkerboarded” by a variety of land ownership and statuses.  Land might be owned by the tribe, an individual Indian, or a non-Indian.  The land might also be a trust land, fee land, or under NPS or BLM jurisdiction.  Furthermore, a single parcel might have one status for its surface and yet another status for its subsurface.  Because all transactions regarding the land is overseen by the Bureau of Indian Affairs (BIA), all lease negotiations, permits, and tribal/individual payments are handled and distributed by the federal government.  This means layers of red tape for any economic development.  To complicate the process, several generations of inheritance to an allotment has created the problem of “fractionalized interest”.  Some allotments may have thousands of heirs on one property.  Any decision on that land use may only occur with consent from 100% of those heirs.

This study is especially important for energy development in Indian Country.  Tribal lands are rich with billions of dollars of oil, gas, uranium, coal, etc.  As we have seen in the situation with Standing Rock and the Dakota Access Pipeline, tribal lands are often exploited and/or endangered to extract resources on or near the Reservations.  The lack of proper tribal consultation has perpetuated the neglect of sovereignty rights.  Pipelines skirt tribal lands to avoid paying royalties.  When resources are extracted from tribal lands, the BIA has notoriously undervalued these resources negotiated and then mishandled the royalties.  (The Navajo Nation won a $554M settlement for this mismanagement.)  Many energy companies also avoid leasing tribal lands because such development requires working with 4 federal agencies – a 49-step process that can take years to complete compared to 4 steps and a handful of days on non-tribal lands.  While many of us hope tribes will not develop their non-renewable energy resources, the fact that the federal government has both complicated and irresponsibly managed the process is a damper on tribal sovereignty that leaves many communities locked in an impoverished state.

Land status is therefore a crucial component to the future of the Navajo Nation and its economic development.  By analyzing the historic concepts of land ownership alongside the present trust format, DPI can make suggestions to reform the system.  Gaining more control over the process will ensure proper management of mineral and monetary resources, practicing the sovereign right to develop both renewable and non-renewable resources, and the ability to incorporate traditional values into the land management model.  Perhaps most importantly, the land reform study can help to promote adequate tribal consultation in the face of a new federal administration that has expressed an interest in “opening Indian Country up for business”.