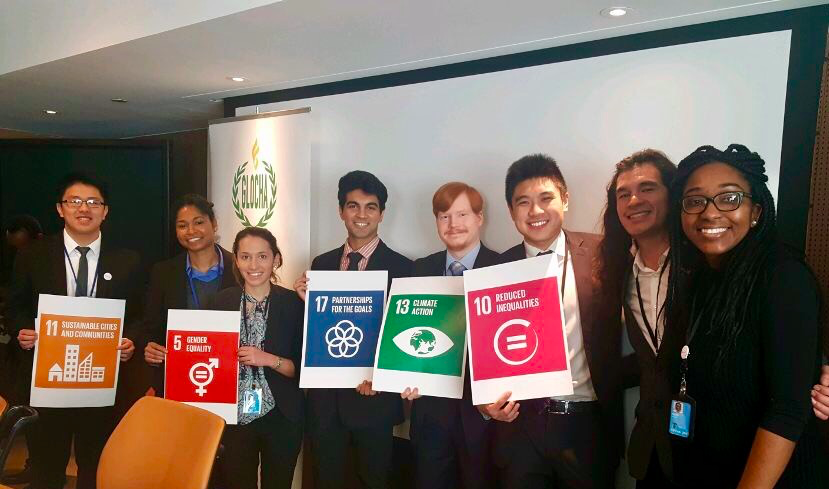 Our Delegation to the 55th UN Commission for Social Development

Hello from the delegation for the 55th United Nations Commission for Social Development! We are a group of young people ranging in age from 17 to 30 who are all committed to sustainable development and thrilled to be here at the UN HQ! After two days of exciting youth conversations at the ECOSOC Youth Forum, we are ready to get started at CSocD. Agents of Change Coordinator Zephanii Smith led a really helpful, organized, and engaging training session last night. We were able to hear best practices from youth leaders Timothy Damon and Steve Lee, who are veterans of UN climate spaces and are innovators in sustainability education. Learn a little more about our delegation below:

Saad Amer is a photographer, environmental scientist and adventurer. A recent graduate of Harvard University, he researches global environmental phenomena and uses photography and video to fight climate change and promote sustainable development. He is currently working on a photobook based on a recent expedition to the Himalayas. Check his work out at Saadamerdesign.com

George is a high school student from New York. As a student, George has always been interested in global affairs and civic engagement. After learning about SustainUS, he immediately jumped on the team to advocate for climate reform. George joined right at the peak of the 21st Conference of Parties and acted as a mobilization captain to promote the SustainUS delegation abroad in Paris. After engaging in developing events and social media campaigns, George became interested in modern activism and began to get more involved with SustainUS. He currently helps out as a community development member on SustainUS’s Coordinating Body. In the future, he hopes to pursue in a career in the foreign service or in social development.

Shani Christopher currently serves as the National Director of Sales and Operations at EcoLogic Solutions, a B corp certified manufacturer of green cleaning products and technology. Prior to EcoLogic, Shani was a founding member of the Volunteer Center of Trinidad and Tobago, an NGO promoting volunteerism to foster a culture of active citizenship and social responsibility among young people in Trinidad and Tobago. After recently moving to New Orleans, Shani is a member of the New Orleans Global Shapers Hub and is always seeking to build teams and communities to find solutions to global issues.

Michael “Keoni” DeFranco Keoni DeFranco is the Founder and CEO of Lua, a secure communications system designed for the healthcare industry. Lua is a graduate of the New York based technology incubator, Techstars. As a Kanaka Maoli (Native Hawaiian), Keoni is actively engaged with grassroots efforts to help build a sustainable plan for Hawaii moving forward.  Keoni is a 2010 graduate of Wesleyan University where he received a B.A in International Relations with a focus on “Nation Building” and “The Arab-Israeli Conflict”. Keoni has studied Business at the London School of Economics.

A SustainUS veteran, Amy was a delegate to the United Nations Commission for Social Development in 2013 and a delegation leader in 2014. Particularly passionate about social and economic justice, she studied labor policy and workers’ rights at Cornell University, where she was a student activist and foreign policy director of a student-run think tank. She has previously worked in the White House’s Council of Economic Advisers on the labor and criminal justice policy portfolios and in Wall Street regulation compliance on foreign exchange and global financial crimes compliance, learning about the financial industry’s role in combating human trafficking and terrorist financing. Her volunteer work includes tutoring English to dairy farmworkers, supporting debate instruction to male teens in a maximum-security prison, and consulting small New York City nonprofits on how to better use social media.

Halimo Hassen is from Atlanta, GA and completed her undergraduate studies at Dartmouth College. She is a rising graduate student at Tsinghua University, where she will be studying as a Schwarzman Scholar. Through undertaking a Master’s in International Affairs in China’s capital, Halimo hopes to learn more about China’s continued importance in a globalizing world. She also aims to aid communities through pursuing and supporting non-profit organizations that serve under resourced areas in the future. She is interested in entrepreneurship, business, policy and education as fields of study and as components of her future profession.

Robert is a sophomore studying sociology at Dartmouth College. He has previously interned at the White House during the Obama Administration and is passionate about community organizing and grassroots mobilization. Robert is a firm advocate of civic engagement and believes in the ability of a concerned group of people coming together for positive social change.

Aubree has worked for more than six years as a youth advocate for human rights both domestically and internationally, most recently working with the United Nations Population Fund (UNFPA), the U.S. Department of State, and several human rights NGOs. Since recently graduating with an MSW in Social Policy & Program Evaluation, Aubree has been invested in youth-organized humanitarian initiatives. Specifically, Aubree has focused on improving government programs and civil rights for women and girls, survivors of sexual and gender-based violence, and LGBTQ individuals. Aubree is passionate about organizing domestically and internationally to ensure safety and opportunities for the next generation of diverse government leaders and innovators across the world.