In a spectacular display of activism and solidarity, young Americans all over the country signed and shared a letter to President Trump this week, urging him to uphold the United States’ commitment to the Paris Agreement. Mr. Trump is widely expected to withdraw from the international agreement, signed by 195 countries in 2015, and he will make his final announcement this Thursday. Ahead of his decision, young people across the country have sent a bold statement expressing our desire not to abandon American leadership on the clean energy future. 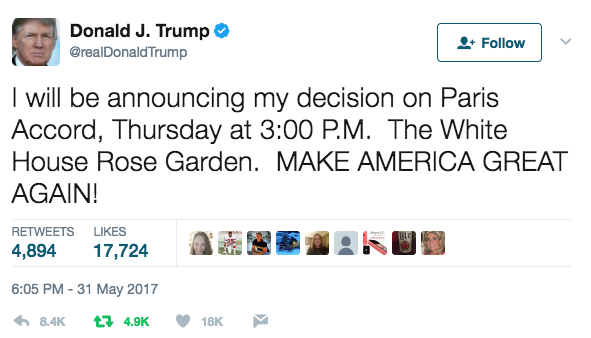 All week, the news has been filled with reports that President Trump is looking to abandon America’s global leadership on climate, and leaders from every industry — diplomats, generals, scientists, even oil giants Exxon and Conoco — have weighed in on what it would mean for the nation and the globe if America pulls out of the international consensus. In scanning these headlines, however, one thing that’s clear is that one group has been largely unrepresented in the media discourse surrounding Trump’s decision: young people. As young people ourselves, this irritated us. What do we have to say? A lot, it turns out. In response to our lack of representation, a group of us wrote our own message to set the record straight.

The genesis of this project illustrates perfectly how social media is essential in creating a national climate justice movement. The letter began as an idea posted on a Facebook group for the COP23 Creative Challenge. None of us would have had the chance to collaborate to create this letter if it wasn’t for the SustainUS Creative Challenge, an initiative designed to enable young people to add their voices to the climate conversation, in their effort to join this youth-led climate organization. For months, we have been sharing our creative work with each other and it has spawned a fertile environment for ideas to spread and take root.

Within minutes, we were all chatting with each other about what we, as young people, wanted to say to Mr. Trump. Millennials are uniquely suited to using social media to tackle climate change: nine out of ten of us are concerned about climate change, and nine out of ten of us are on Facebook. Nearly half of us use the platform every day. If we wanted to make an impact and garner wide support, it was clear that Facebook would be a key channel for spreading our message. The potential to make climate change a viral phenomenon is an enormous opportunity for the sustainability movement, and the letter to Trump is just the beginning.

With the benefit of online collaboration, our group, spread across our own corners of the world — east coast, west coast, north, south, even London — was able to draft up and share a message to the President about why keeping the United States in the Paris Agreement is good for our country and good for our future. It’s easy for Trump to want to pull out of the Agreement — he isn’t going to live with the consequences if he does. But we young people will, and that’s why we refuse to remain silent on this issue while he decides our fate for us. That’s why, within mere hours after its release, the letter has been signed by over 1,000 young people spanning the country, and has been shared widely across the climate justice organizations we represent.

This of course is only a fraction of the potential social media has to change the discourse around climate change. With the right strategy, climate justice organizations can collaborate and share content almost instantly across the bulk of the internet, and do it at next to no cost. Given millennials’ passion for climate justice, we will continue to use our digital fluency to take back the conversation before the President turns his back on our future.

So, what do young Americans have to say to Mr. Trump about the Paris Agreement? We want jobs, we want justice, and we want a future that isn’t tarnished by the stain of global warming. You can read the letter below, and if you too believe that America should uphold its international commitment to the Paris Agreement, please share this with your networks and add your name to the list!

We, the young people of America, are writing to urge you to please keep the United States in the Paris Climate Agreement. We are the future of this country, and we come from every corner of our great nation. We have seen droughts, heatwaves, forest fires, and floods in our hometowns that get worse every year. You have a unique opportunity and responsibility to keep Americans safe from these threats, by affirming America’s leadership in the Paris Climate Agreement and investing in a better future for all of us.

We support the Paris Agreement not only to minimize the growing impacts of extreme weather, but to see the United States remain an industrial leader in the 21st century. Adhering to the Paris Agreement is America’s best opportunity to create good-paying jobs. Right now, clean energy employs five times as many Americans as fossil fuels. Meanwhile, China is investing ten times more capital in clean energy than the United States. If America does not commit to Paris and lead the transition to a low-carbon economy, China and other G-7 players will.

You promised to revitalize American industry, and the Paris Agreement does just that. If America loses its competitive edge in the 21st century, then Americans will miss out the opportunity to grow our economy in a way that will generate sustainable employment and keep our communities safe from pollution for decades to come. By remaining in the Paris Agreement, you will be signaling to young Americans that our future is worth investing in.

The Paris Agreement will shape the economic, social, and environmental development of our nation and global community. As young people who will face the negative impacts of pollution and extreme weather, record-breaking temperatures, and unsustainable economic policy, we strongly urge you not to compromise our future by withdrawing from the Paris Agreement. Please consider our appeal while making this momentous decision. Young Americans are counting on you. Please don’t let us down.

If you’re a young person, share this message and add your signature! To view all the submissions to the Creative Challenge, including those from Allie and Jon, visit our Final Submissions page!