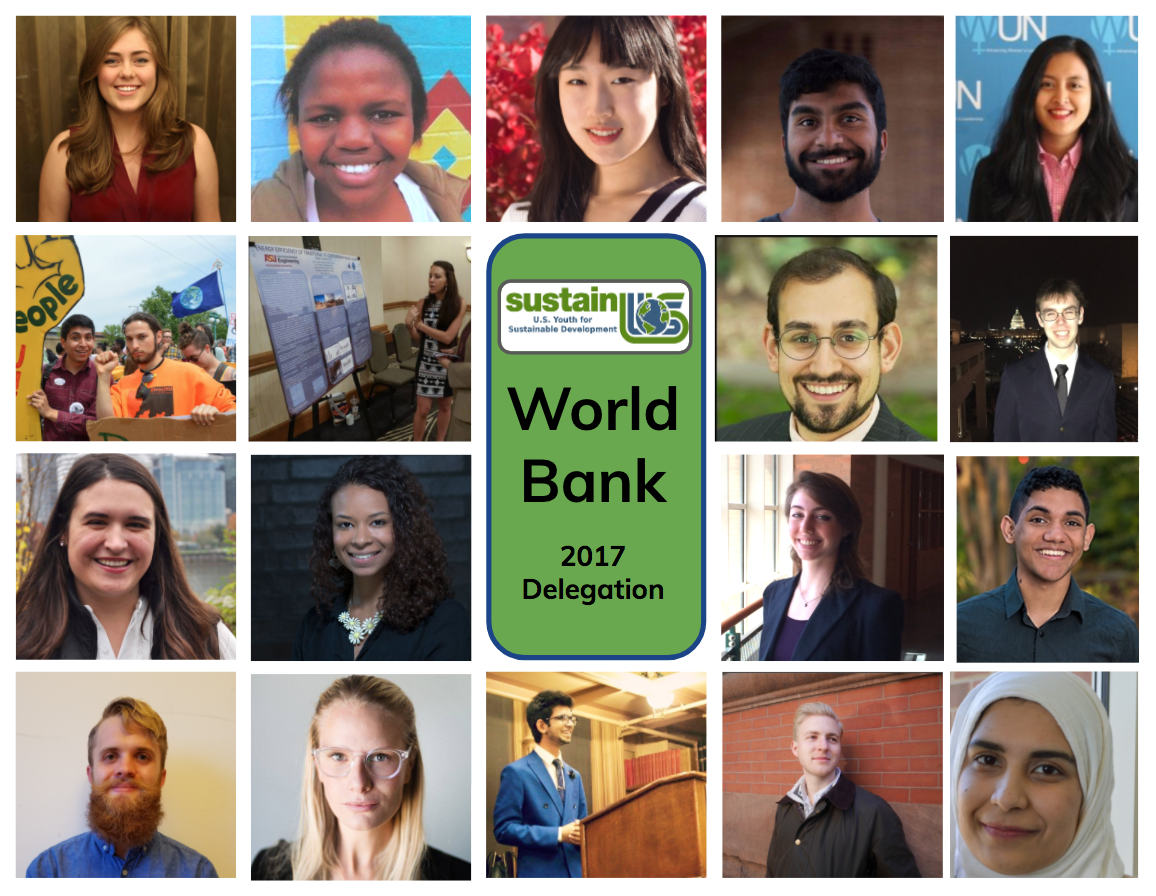 Day two of our delegation was action-packed!

We started off the day with a quick meeting about what this week was going to look like, what we were excited about, and all that we were hoping to accomplish.  Then our delegation walked into the first meeting of the week, the Civil Society (that’s us!) Orientation. 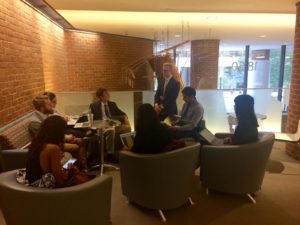 There we learned about the World Bank Group structure, legacy, and history.  We came to understand how the bank came to be and how it was hoping to change as the world around it did since its inception over seventy years ago.  A highlight was learning that the bank makes decisions through a one country-one vote system along with how many shares an individual country held in the bank.  The U.S. has the largest share, at a whopping 15% of the Bank.

Finally we learned about the mission of the World Bank: 1) to eradicate poverty (down to 3% in 2030) and 2) to create shared prosperity for all.  The Bank mainly uses loans and guarantees to support developing countries both in the private and public sector to achieve these goals.

After hearing the structure, it was clear three were issues with indigenous communities worldwide, often called “nations within nations”.  One of our delegation leaders, Kayla DeVault, asked a stumping question at the Q&A.  She asked, “How do indigenous Americans fit into the World Bank – do we fall under paternalistic American governance?  The question was met with surprise.  The presenter said that although he had worked with indigenous communities before in Central America, there were no legitimate avenues for engagement within the World Bank Group and the United States Government.  Furthermore that the U.S. was a shareholder not a recipient country.

This was troubling.  As we continued our day, individual members attended meetings through the World Bank and the International Monetary Fund (IMF).  Here is a taste of what our members heard, thought, and questioned at their first day of meetings:

[Analytical Corner: The Effects of Weather Shocks on Economic Activity.  How Can Low-Income Countries Cope?]

This session was focused on both long and short-term effects in both low and high-income countries.  Some key findings were:

In terms of policies to address this, they defined Mitigation, or any policy that affects emissions of greenhouse gases, and Adaptation, that seeks to help nations cope with climate change.

Our delegate Cassidy asked: Is the IMF studying carbon pricing?  The answer was Yes, IMF has been working quite a bit on carbon pricing in the last decade.  Additionally, Fiscal Affairs and looked at the issues.  As a point of strength they noted “Carbon pricing prevents fiscal shocks and provides policy buffers for countries”.

This meant then that carbon pricing is a potential policy approach that can be used to lower risk investment.

The rest of our orientation focused on the mechanism by which communities raise issues to the World Bank in their investment-related projects.  The Bank identifies the GRS for the public sector and the Ombudsman for IFC (private) related-investments.

The results are mixed.  On one hand these processes are independent of the investment-making bodies.  On the other hand it is often difficult to lay responsibility in any party because of the complexity and number of actors and financiers involved.

Delegate Brian Gómez asked about the Ombudsman: “Do the performance standards (which include labor, environmental rights, etc.) impact the Ombudsman’s compliance portion; if so, how is the severity of these judged?”

The answer was because of a lack of relationship the standards are evaluated on Ombudsman “judgment”.

This session was focused on the future of Agriculture.  Along with some disturbing figures, this session provided a future agriculture framework that shows promise.

One of these figures was learning malnutrition is a plague –> 1 in 9 people globally are suffering from malnutrition, and in many of the same countries obesity is also becoming a plague.  Our agriculture systems currently consume 70% of current freshwater!  And 1.3 Billion metric tons of food are wasted annually.

It was also clear that agriculture itself was rapidly transforming.  In the next 50 years there will be 1.6 billion new jobs in agriculture, 300 million of which will be in Africa.  And in Asia, a rapid shift to processed food is underway.

These changes, according to the World Bank show an enormous amount of opportunity to private capital.  The UN Sustainable Development Goals alone lay the groundwork for 2.3 trillion dollars in investment opportunities.  Agriculture specifically is a leading drive of impact investment.  To accomplish this they identified a new framework that included sustainability, nutrition, and traditional knowledge.

However many problems were brought up.  One case study in The Philippines, showed that the World Bank, through private capital was often not respecting the framework they had outlined.  That community lands were often the road to national economic growth, but the losers were affected communities in these regions.  Another problem was that in regulation of agriculture, farmer had to pay more for water and cash crops were emphasized.  The conclusion of the session was that the solutions must contain farmer empowerment, however the mechanism for this solution was not fully expressed.

This session was focused on the future of work, or rather, if formal work would exist as we know it?

The session started off talking about youth and the disproportionate impact they were left by as a result of the financial crisis.  Although computer knowledge and being tech savvy have become a staple of a good worker, many workers expressed more worry than optimism in the future of technology.  Additionally, higher skilled workers expressed more positive views on technology’s role in work.  In Latin America however, it was noted that although for example cell-phone ownership was at an all time high, skill bases were low, specifically in education.  An African panelist said that although automation is likely, work itself would always exist.

Delegate Greg Eichhorn asked the panel: “Why does work have to be about productivity, why shouldn’t we think about how leisure can play a role in human daily activities once many jobs are automated?”  The answer was that the job market will shift, not disappear, and that we have seen this happen before – in the Industrial Revolution, for example.

At the end of an interesting first day, we all huddled back into our meeting space.  We went around and shared a summary of our thoughts, feelings, and tried to vocalize what had been a full day.  Some of us said we felt grateful to be in community with the delegation, that we learned and had experiences that were informative and thought-provoking.

Others said they felt more clear on their objectives fort he week and why they were there, that our role was not only to learn but to question and to use our voices in this space far and wide throughout the week.  Finally, we closed out the night in an almost now empty building and headed home to what new experiences tomorrow would bring.