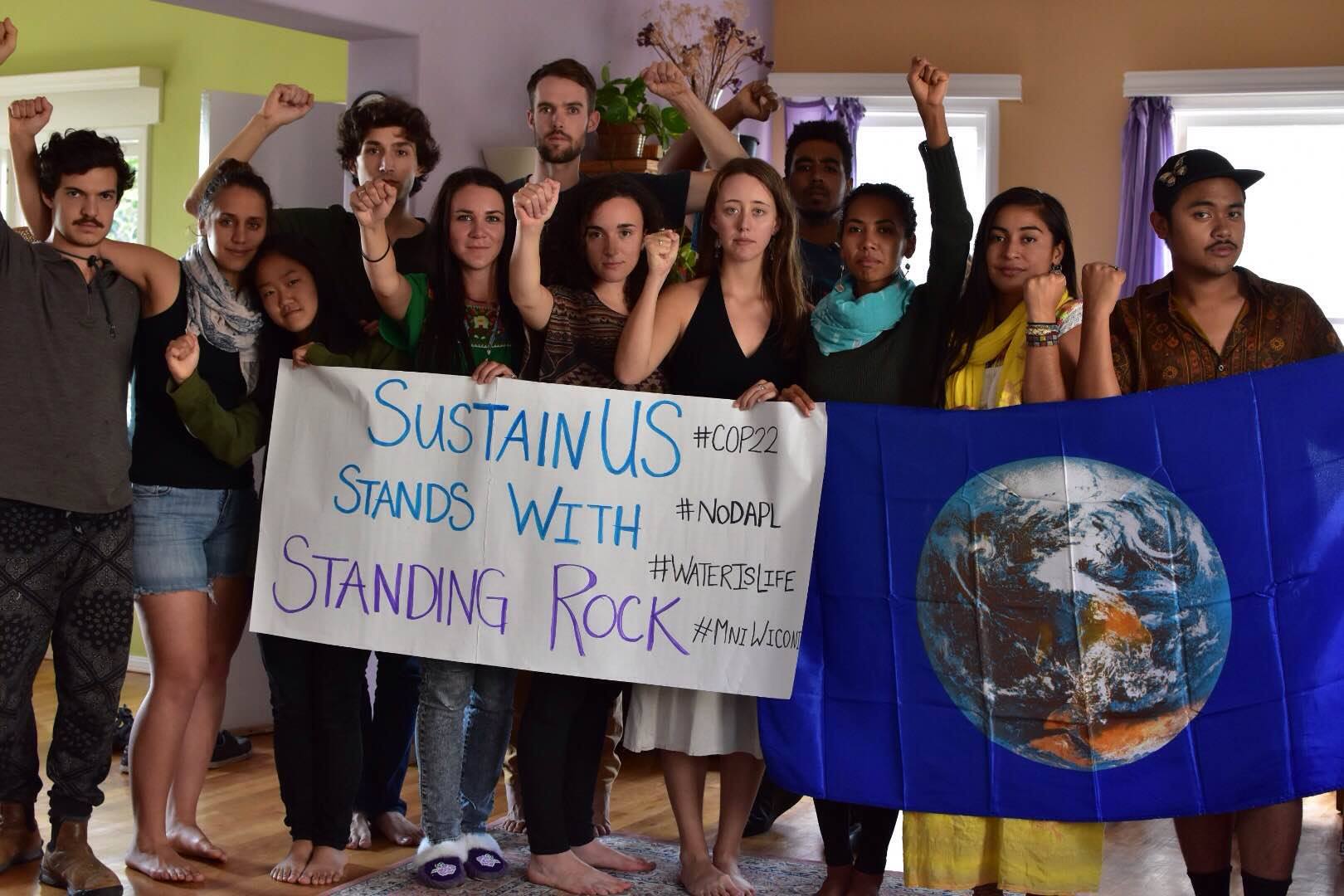 Stand with Standing Rock – Not on It

The sun was hot, and the pavement on Highway 1806 was even hotter. The guests at Sacred Stone Camp had just finished a communal lunch. They began falling into line behind the same banners that had led this march every day, a march up the highway to pray for the Dakota Access Pipeline’s construction to halt. Just behind the banners, a cluster of Havasupai men and women gathered in rhythmic songs in their native tongue. The men sweated in colorful ribbon shirts, beating handheld drums. The women swayed to the beat in their tiered skirts and beaded shawls. For a half an hour, they sang like this, only briefly stopping when one of the women collapsed to the pavement in the heat. Today was their time to spiritually lead the protectors at Standing Rock. These Havasupai had come clear from the southwestern deserts for this purpose. No heat spell would deter them, and certainly no oil company was going to threaten a group of faraway strangers who had been subjected to the same governmental policies and historical trauma.

When I protested alongside Standing Rock and other allies on September 3rd, the vision was clear: peacefully protect. The camp never exacerbated hate. Even as Lakota churches (prayer rings, burials, and cairns) were being destroyed by the pipeline company, the front lines offered up their forgiveness for the workers’ ignorance. Each day centered around prayer and song, of renewing our connection. Daily ceremony is something I have become accustomed to on the Navajo Nation, where medicine men can be seen leaving their hogans to greet the sunrise with corn pollen. This kind of ceremony is a practice used to maintain balance that I find separates the indigenous from the spiritually landless who have lost their indigenous roots.

The #NoDAPL movement at Standing Rock is a powerful one because of the prayer that maintains its focus and the cultural diversity that is revered. These are important qualities that are quickly lost in predominantly non-indigenous circles. Since the beginning of contact, certain language has been used to degrade and dehumanize indigenous peoples on Turtle Island. Outdated stereotypes constitute the majority of indigenous representation in mainstream media. Expensive football tickets are sold in the country’s capital for a team named after a racial slur. Attitudes that justify calling an indigenous woman “squaw” contribute to the highest rates of rape in a single race. Indigenous people also have the highest rates of youth suicide and police violence per capita, and all of these statistics can be attributed to stereotypes and misrepresentation. Why is this important to #NoDAPL? This misrepresentation leads to media censorship and the appropriation of the movement.

If we think about censorship and #NoDAPL, we might picture corporate censorship that protects the energy company from a negative light. This type of censorship has undoubtedly occurred in mainstream media, highlighting one paradox that plagues tribal nations: that an energy company can have a more sovereign representation in the media than an actual sovereign entity. While Energy Transfer receives journalistic immunity, Standing Rock is subject to slanderous quotes by the authoritative voice of a Sheriff who was not present and of white community members who view the protest as an inconvenience to their privileged lives. The LA Times published elements of Morton County Sheriff Kyle Kirchmeier’s formal statement regarding the event in which he states, “Any suggestion that today’s event was a peaceful protest, is false…Individuals crossed onto private property and accosted private security officers with wooden posts and flag poles”. (Kirchmeier was not present at the site, therefore he reported information given by Energy Transfer personnel.) The New York Times quoted one resident asking, “You get 2,000, 3,000 Natives together – is it safe?”. It’s unbelievable that such a quotation was published. (You also get several thousand non-Native people gathered at sports games. Is that safe?) It reflects the mentality of the community around Standing Rock.

However, I would argue that the censorship of indigenous peoples runs much deeper than this kind of surface censorship. There is also censorship through the representation of both the movement and Standing Rock as a nation. How many articles have been published that take quotes strictly from Sherif Kirchmeier or Energy Transfer employees? The media’s decision to rarely interview the hundreds of tribal national presidents and leaders who have voyaged to Cannon Ball demonstrates either the media doesn’t believe – or doesn’t believe their readers believe – that these indigenous peoples are as important as non-indigenous representatives of a corporation or local law enforcement. Instead, it takes celebrities like Shailene Woodley and Leonardo DiCaprio to capture America’s respect for #NoDAPL. Woodley represented the cause early, joining the Standing Rock youth on their run to Washington, D.C. In July, she posted an Instagram picture from the Capitol with the text, “The youth of the Standing Rock Reservation ran 1,800 miles from North Dakota to Washington, D.C. to protect their water from the Dakota Access Pipeline that will be built on their reservations.” She then included a link to the #NoDAPL petition in her bio.

An additional concern is how mainstream representation of the Dakota Access Pipeline dispute fails to capture the spirit of the movement. This is not some battle cry for Mother Earth or even some radical environmental statement. This movement is centered around sovereignty. Just like our natural resources, if our sovereignty is compromised then so is everything else in our lives. What is on the line? Our freedom of expression, of religion, of access to culture. The media censors the #NoDAPL movement by failing to elaborate on this core issue. This absence of representation instead perpetuates the ignorance many non-indigenous communities have around the political status and alleged freedom of tribal nations, and how many hundreds of them exist in America alone.

Finally, just as language can be used to dehumanize a group of people through racially-charged vocabulary, it can also be used to make one race of people’s culture seem inferior, pushing it to the fringe of society. As Simon Moya-Smith points out, BuzzFeed’s use of quotations around the destruction of Lakota “sacred sites” insinuates a religious inferiority. Would we publish that terrorists bombed a Catholic “church”? It’s the same story, just a different race.

While mainstream media seems vetted against properly representing Standing Rock and its efforts, thousands of non-indigenous people have gathered in Cannon Ball and at marches in cities to stand in solidarity with the tribe. Less than a week after Energy Transfer’s hired security guards attacked unarmed people and intentionally destroyed sites protected by NAGPRA to advance their motives, our SustainUS delegation held its retreat at Canticle Farms in Oakland, California. The day I arrived to Oakland, San Francisco held its solidarity march for Standing Rock. I joined the march and learned something I hadn’t realized before: Movements – and not just culture – can be appropriated, and the consequences are uncannily destructive.

It was uplifting to see so many people gathered in support of a cause hundreds of miles away; however, it was discouraging to see stereotypes, generalizations, cultural appropriation, and misrepresentation within the movement itself. Non-natives were smudging, beating drums, and seemingly trying to imitate the prayer at Standing Rock. Just like the generalizing comments I read on article links, folks would say things that imply all Natives are peace-loving and earth-worshipping. This generalization is not accurate, and it buries the environmental issues we have in our tribal communities such as dumping and limited access to recycling services under a race-based stereotype.

Furthermore, as the protesters gathered on September 8th in downtown San Francisco to draw attention to the movement, they took what the movement stood for and appropriated it. Instead of calling for the defense of Lakota sovereignty, protesters were suddenly blocking entire intersections, screaming up at the CitiBank building, and accusing the San Francisco Police Department of defending the bank’s entrance. This caused a huge divide in protesters as Native citizens cried: “This is a peaceful demonstration of solidarity. This does not embody the sentiments at Sacred Stone Camp. Stop making this about you!”

It is so crucial to remember the #NoDAPL fight is to protect tribal sovereignty, not to protest anything else. It’s this sovereignty that is undermined by Native mascots, media censorship, and non-tribal entities’ use of eminent domain on treaty lands. For a country that has supposedly adopted the United Nations Declaration on the Rights of Indigenous Peoples (UNDRIP) in the last year, the United State’s complacency towards Energy Transfer’s blatant disrespect for tribal sovereignty should be more alarming than ever. Chairman David Archambault II has recently taken this issue to the United Nations to receive international support. Now it’s our delegation’s turn to make sure #NoDAPL is properly represented in person, spirit, and media as we bring this issue of tribal sovereignty and corporate power to COP22.