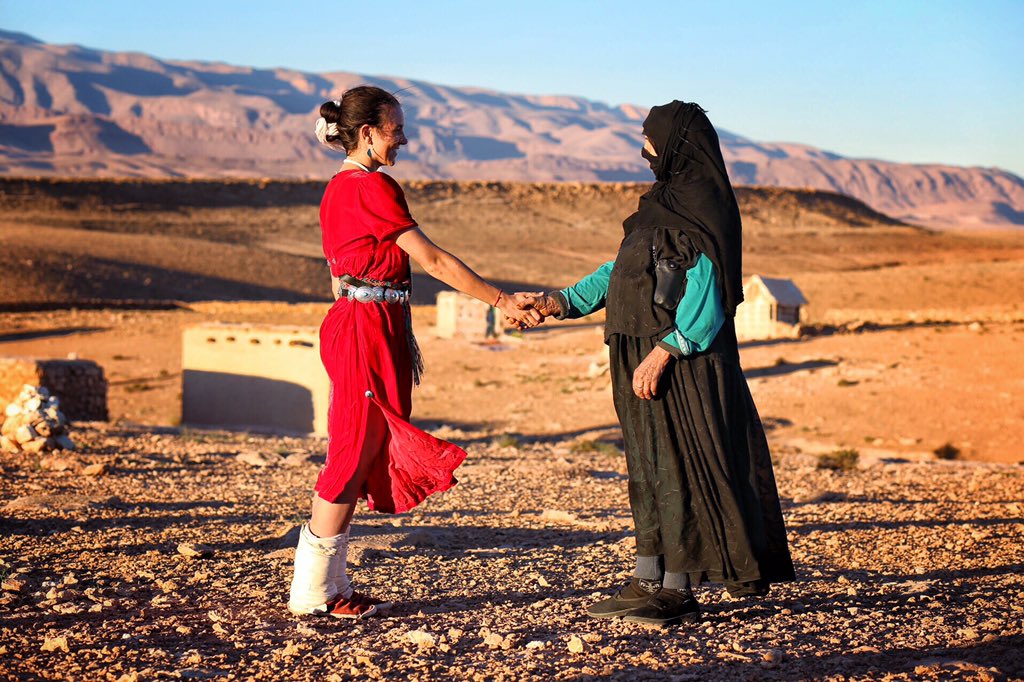 “What would you die for?” It is a question not often heard at the UN Climate Negotiations, but one that broke into these halls of power on Thursday afternoon. Posed by indigenous youth delegate Niria Alicia Garcia Torres, she demanded of the crowd: “Tell me, what is it you would die for? And what would you stand for?” 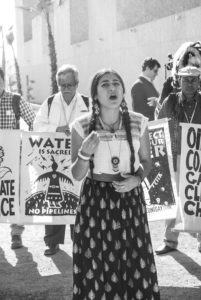 It is these same questions that have been guiding the hearts of water protectors at the historic protest camps against the Dakota Access pipeline on the treaty lands of the Standing Rock Sioux in North Dakota, USA. Members of over 200 tribes and thousands of allies have gathered over the past seven months, facing off militarized police, sound cannons, rubber bullets, pepper spray and attack dogs as they stand resolutely on the side of life – with song and prayer, defending their lives, land and water from a 1172-mile oil pipeline.

The resistance camps began in April after a group of Standing Rock Lakota youth ran to Washington, DC to deliver a message to President Obama. Their act of prayer drew attention to the “black snake,” prophesized to bring about the end of the world and currently threatening the Missouri River, surrounding land, and Lakota cultural and burial sites. The burgeoning camps have since caught the heart of thousands around the world, bringing to light issues of indigenous sovereignty and improper consultation that have been silenced through hundreds of years of colonization in the United States.

On Sunday, here at COP22, the International Indigenous Peoples’ Forum on Climate Change released a solidarity statement with first peoples from six continents who condemn the construction of the Dakota Access pipeline and stand with the Standing Rock Sioux and allies in their prayerful resistance. Members of the forum spoke up at an action today inside the UN, echoing a common sentiment: all of our struggles are connected.

“Right now off the shore of our islands, the largest seismic blasting ship has arrived, brought by Chevon and Statoil, who are supporting the pipeline in North Dakota,” said India Logan-Riley, a Maori youth delegate from Aotearoa.  “Also, right now, we have American warships in the harbour of our largest city, [symbolic of the US military,] who are also condoning and allowing this pipeline to go ahead. We know as frontline communities that to delay a decision on this is to harm us, to hurt us, to damage our culture and peoples and to endanger our lives.”

Two days ago, India and Niria stood alongside fellow members of the Indigenous Youth Caucus and hundreds of others by the 195 flags of the United Nations. On an international day of solidarity that saw a wave of hundreds of #NoDAPL actions around the world, from London to Sydney, the global climate justice community at COP22 took a moment to pause from fruitless negotiations. While some of Tuesday’s solidarity actions looked like the escalated shutting down of banks funding Dakota Access, the group that gathered in Marrakech stood in prayerful vigil, reflecting and honoring the courage, nonviolence and resilience of those on the frontlines.

A circle of nearly 200 people formed at sunset, joining hands to encircle a smaller group of indigenous leaders. Prayer began with the soft words of Elder Francois Paulette of Dene Nation, thanking the Amazigh ancestors on whose ground we stood, calling in the four directions and asking permission of Mother Earth. Sage invited in each participant as Kayla DeVault, SustainUS delegate from Navajo Nation, walked the inner circumference, carrying a smudge stick. In a stark departure from conventional protest actions at the UN, several “no camera” signs surrounded the circle, and each passerby who lifted a phone for a selfie was firmly stopped. “You are welcome to join us, but please don’t take photos. This is a ceremonial space.”

While international activists gathered outside the UN, just #300kmSouth of the conference center another indigenous community continues a similar struggle to Standing Rock. The Amazigh Ait Atta people of Imider have occupied for six years the land around a valve to an industrial well that drains their water for a silver mine owned by Managem, a corporation owned by the King and a sponsor of COP22. Nadir Bouhmouch, a Moroccan activist, joined the prayer circle outside the UN to share a visionary solidarity statement from Imider: “Five years later, the tents of our protest camp have now become permanent clay and stone dwellings as we continue to stand, sleep, eat, sing, create and live of the way of a mining corporation that has polluted our water and soil. We should say that we hope your camp will flourish like ours, but it seems it already has. We wish you victory, inchallah.” 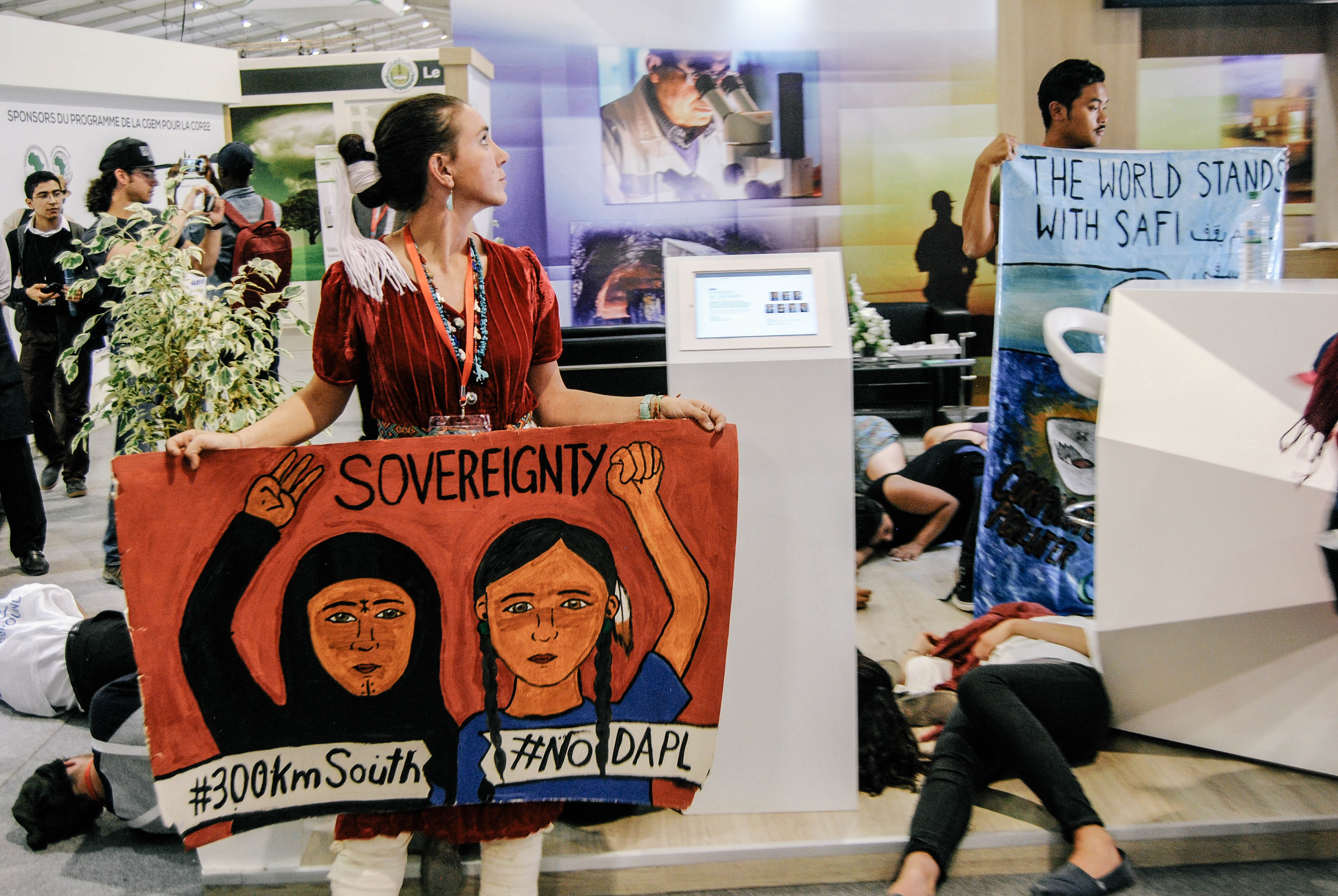 Just one year ago, the gavel fell at COP21, finalizing the Paris Agreement, announcing the world’s governments’ aspirations to limit warming to 1.5C. A recent report by Oil Change International found that to meet this goal we can build no new fossil fuel infrastructure, and that we must begin to close existing oil fields and coal mines. Yet the Paris Agreement fails to once mention the words “fossil fuels.” There is no mechanism of connection between this supposedly historic agreement and the realities frontline communities face struggling to keep fossil fuels in the ground.

The water protectors at Standing Rock have done more to slow climate change than the UN climate negotiations. And with an incoming President Trump, the possibility of the US abandoning the Paris Agreement entirely, and the third consecutive warmest year on record celebrated with pipeline proposals, it is ever more clear that climate justice is in the hands of the people, not the policymakers.

Yet, as Indigenous Environmental Network’s Alberto Saldamendo reminded the crowd at today’s action: “This is not about politics. This is not about emissions. This is about the people who are being directly affected.” While the struggle at Standing Rock can be seen as a shining light in a dark time for climate action in the United States, it is essential to remember that this fight is not first and foremost about climate change, or fossil fuels, or even clean water. This is a struggle for sovereignty, for the rights of tribes to determine their own destiny.

As COP22 draws to a close, some posit that a solution to Standing Rock’s struggle may be to see their eight-tipi flag flying amongst thousands of others at a more inclusive United Nations. Yet, those settling in for a North Dakota winter have no eyes on this process. They see that this question of sovereignty, of the sacredness of life, runs much deeper than politics. What we are being asked for in this time requires no negotiation. Do we stand for life? Would we die for our future?