Today we mourn the lives of our friends, families, and future generations threatened by Trump’s reckless choice to pull the US out of the Paris Climate Agreement. While the Agreement is far from sufficient, it represents a necessary lowest bar that has fundamentally shifted what’s possible as we transition away from fossil fuels to a just and sustainable economy.

The Paris Agreement does not function through legislative force but creates a kind of diplomatic stage. Unlike previous attempts at a global climate accord, the Paris Agreement does not bind participating countries to cut greenhouse gas emissions. Instead, countries must report back regularly on what they are doing – or not doing – to stave off global climate chaos. The Agreement also sets an aspirational target to limit global warming to 2°C and, if possible, 1.5°C. By aligning the focus of businesses, cities, and nations around a common vision of what is possible, the Agreement helps to catalyze tangible transformation in domestic policies.

We know the Paris Agreement would never be enough to ensure justice for youth and frontline communities. But we have plenty of evidence that it’s a platform worth having.

In early May, Germany broke all records by generating 85% of its electricity consumption from renewable sources. Under its Paris Pledge, Germany plans to reduce greenhouse gas emissions 95% by 2050. China made a massive commitment, promising to build as much new renewable energy within five years as the entire world produced in 2014. Not to be outdone, India followed suit with the same pledge. Costa Rica beat everyone by pledging to be entirely carbon neutral in five years. And these are just a small sample of the 195 commitments made through the Agreement.

The Paris stage even makes room for state and local efforts in the United States. Flying in the face of a hostile federal administration, states like California and New York are making bold policy commitments that pull the US rapidly away from fossil fuels and closer to just, sustainable, and renewable energy economies. Thanks to the efforts of groups like the California Environmental Justice Alliance and New York Renews, these state policies have specific provisions to help marginalized communities build wealth through the transition to clean energy.

Yet more important than any one policy victory, we know that the Paris Agreement lends us critical leverage to draw a big tent around a simple shared task: stopping runaway climate change and fighting back against its disproportionate impacts on vulnerable communities. People power drives policy change, not the other way around. That’s how we’ve halted construction of pipelines endangering our communities, divested trillions of dollars from the fossil fuel industry, and begun reinvesting in safe, clean, and renewable energy jobs.

Limited as the Paris Agreement may be, our shared movements are wielding it to build alignment on bottom-up demands for climate action across our communities, cities, regions, and countries. In Marrakech at last year’s 22nd UN climate summit – 22nd, as many years as some of us have been alive – we shook with grief and horror as Trump became our country’s President-Elect. But standing with fellow youth from across the globe, we unveiled our Peoples To Do List – channeling despair into action and radical hope.

As many of us feared, the Trump presidency has unfolded as a grand attempt to divide us. From criminalizing immigrants to scapegoating Muslims, Trump has constantly worked to create enemies and promote the lie that Americans should remain separate from the rest of the world. This decision to withdraw from the Paris Agreement is a further extension of this hateful lie. But we know the truth — to create a just and stable future, we must come together across race and class and international boundaries to build an economy free from fossil fuels that works for all people.

Today we mourn. Tomorrow, we continue to build with youth across the globe toward an unstoppable climate justice movement. 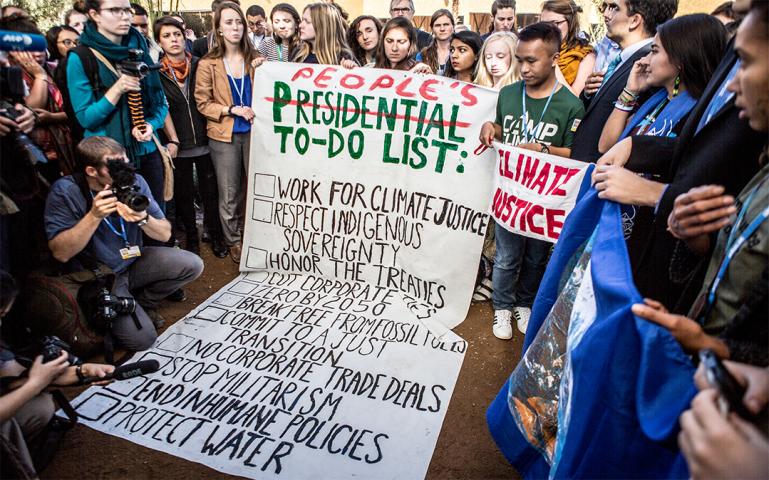